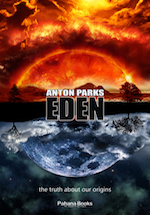 In 1872, the first translation of the Babylonian version of the Flood found in Nineveh appeared in print. Ever since then Assyriologists have been waiting to find and translate the original texts on the Garden of Eden and the Original Sin. Although it was believed that these documents had to exist on clay tablets, they proved impossible to find—until today.

Between 1885 and 1900, archaeologists from the University of Pennsylvania excavated extensively at the site of Nippur (Niffer), in the heartland of ancient Mesopotamia. A great many Sumerian texts were found, including a dozen tablets containing the sources of the Book of Genesis and the origins of humanity. Yet no one seems to have taken much notice! Having taken over the unsatisfying translations of his predecessors, Anton Parks worked intensively during thousands of hours on this material to finally restore the original quintessence of these invaluable documents, in order to expose it to us in this fascinating book.

In EDEN, you will see that the first chapters of the Book of Genesis present only a greatly edited version of what was inscribed on these ancient tablets. The Garden of Eden, the Serpent, and the Fall of Man are presented here in a completely new light, proving that these episodes were altered to the point of incomprehensibility in the course of later rewriting.

Our civilization today is about to penetrate the Secret that has been kept out of the hands of the "profane" at the cost of great sacrifice. Among the treasures to be found in this world, there is only one that holds all of the great mysteries: the true story of Creation and of the origins of God and Evil. In our age of revelations, it seems of the essence to reconsider the facts that led to the founding of the three great religions of the Book: Judaism, Christianity, and Islam. The truths revealed in EDEN are not only earth-shattering, they take us to the very roots of Western civilization!